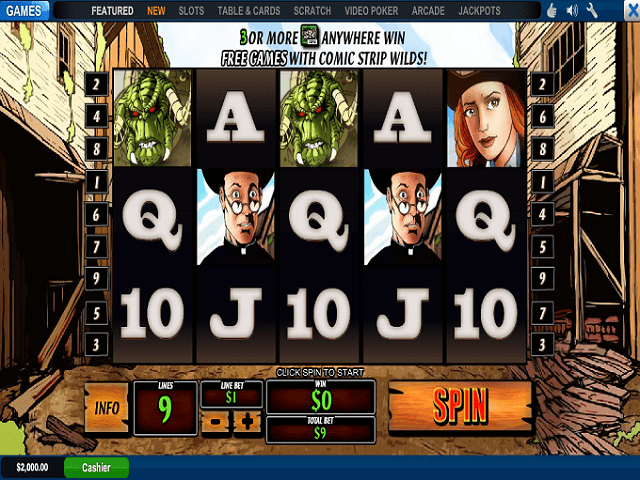 Cowboys and Aliens brings the spirit, if not the actual actors, of the hit science fiction/action film of the same name into a video slot game. In this game, you will see stylized versions of the film’s characters and situations all while attempting to win some nice prizes with a lucky spin or two.

This Playtech slot is available for play at most Playtech casinos, which include Casino Del Rio, Flamingo Club Casino, Prestige Casino, and more.

What many people don’t know about Cowboys and Aliens is that it was a film actually adapted from a popular comic book. Therefore, the Cowboys and Aliens slot game emulates the graphic novel approach, with hand-drawn and beautifully colored symbols and designs. The game is framed with a view of the dilapidated Western town where the action takes place.

The comic-themed game offers a lot of cool symbols from the game, including favorite characters on both the Cowboys and Aliens sides of the equation. As an added bonus, while Verity doesn’t look much like Olivia Wilde, she bears a resemblance to the luscious Heather Graham, which is not bad at all. Other basic symbols such as the classic 10, J, Q, K, and A are also included.

While you are locked at one coin per line in Cowboys and Aliens, you have a nice range of coin values to choose from, starting at just a penny and going all the way to $5, with values like 2 cents, 5 cents, 10 cents, and a dollar in between. This means you can play all 9 lines for as little as 9 cents or as much as $45.

The game features a jackpot of 10,000 coins, but of course, you can win more with multipliers and bonuses in effect.

The wild symbol is the secret to getting a 10,000 coin win in one fell swoop. Get five wild symbols on an active payline, and you’ll make a nice profit before you can say, “Giddy-up!”

The wild symbol, which is the highest valued symbol in the game, is a UFO that is on fire and on its way to a crash landing. It can substitute for all except for other special symbols.

The scatter symbol is the Cowboys and Aliens logo, which pays when you get two or more anywhere on the five reels. If you get three or more, you can get eight free spins.

There’s an alien attack bonus, which occurs when the bonus icon appears on the first and fifth reels simultaneously. We’ll talk more about that in a moment. Then, there’s the alien weapon feature, which is a symbol of a laser gun and only appears on the first reel. Get one, and the gun will reveal a number between one and four, which is the number of symbols that will be “shot” and transformed into wilds.

Free spins are much like regular spins with the exceptions of stacked wilds, which can occur and take up entire reels (or rows) at a time to help you win better prizes. When they do, they also show a scene from the story, which is a nifty addition to the game.

When you trigger the battle with the aliens by getting the bonus icon on the first and fifth reels, you choose from the three main cowboy characters, Zeke (who has a six-shooter), Verity (who has a whip), and the Indian warrior (who has a bow and arrow). Aliens advance and for each one that is killed, you get a multiplier add-on. After your ammunition runs out or all the aliens are killed (if that’s the case, you get an extra bonus), the round ends.

Cowboys and Aliens is a very fun slot game with a cool theme and wonderful art presentation, as well. Aside from the bells and whistles, there are some good prizes to be won and a lot of features that today’s Canadian casino players have come to accept. Still, you can’t discount the great bonus game and other fun elements, which help to set this one apart from the rest.