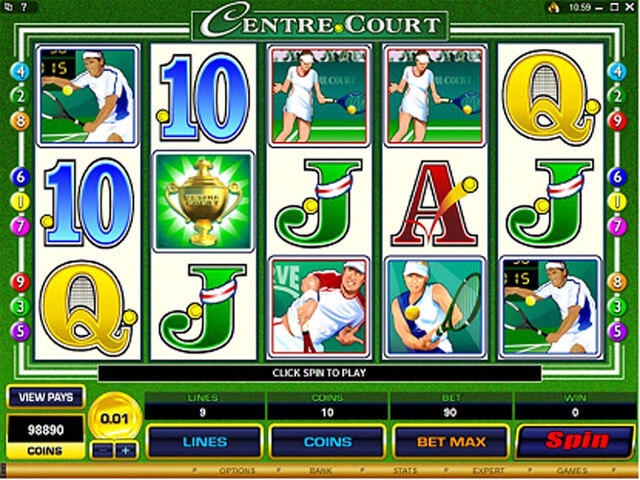 Centre Court is a tennis-themed online slot game that will instantly catch your eye, whether you are a fan of the sport or not. Powered by Microgaming’s acclaimed software, you can find this exciting slot at many online casinos, such as Jackpot City Casino, Wild Jack Casino, and many others.

Filled with eye-popping, state of the art graphics, this video slot will excite players from both Canada and around the world. Symbols for Jack, Queen, King and Ace are joined by symbols that inspire thoughts of tennis, such as Serve, Backhand, Forehand, Tennis Ball, and so forth. Graphically impressive renditions of tennis players performing moves will draw you into the action, and the tennis-themed sound effects will also immerse you in the game.

Coin values are set fairly low, with the possibilities being 1 cent, 2 cents, 5 cents, 10 cents, 20 cents and 25 cents. However, since you can play ten coins per line and there are nine lines to cover, you can bet quite a bit per spin. Otherwise, you can cover nine lines for under a dime, a rarity in video slots.

The jackpot reaches as high as 1,000 coins, which would mean up to $2,500 in winnings if you have the highest coin value.

Centre Court features not only a wild symbol, but also a scatter symbol. The wild symbol is the Centre Court Trophy, which you’ll remember is necessary in order to win the highest jackpot the game offers. Otherwise, the trophy will substitute for any other symbol needed to make the highest possible winning combination.

The Tennis Ball serves (no pun intended) as the scatter symbol in the game. If you get more than one scatter symbol, you can automatically multiply your bet. For two, three, four or five scatter symbols, your bet multiplies by two times, three times, thirty times or five hundred times, respectively.

When you get three scatter symbols or more, you will get eighteen free spins. Then, a multiplier (which remains secret) of between two and five times is awarded on each spin. With the wild symbol in play on a whole reel, you can win up to 450,000 coins if things work out your way, which would equal $112,500 in winnings at the maximum coin value.

This game is a great example of how far video slots have advanced. Far more than an old school slot machine, Centre Court provides wild and scatter symbols, a fun bonus game, a chance to double or quadruple your earnings with a fun “gamble” feature, and great sound effects. The bells and whistles simply add to what is fundamentally a very entertaining game where you can win a lot of money at any time.