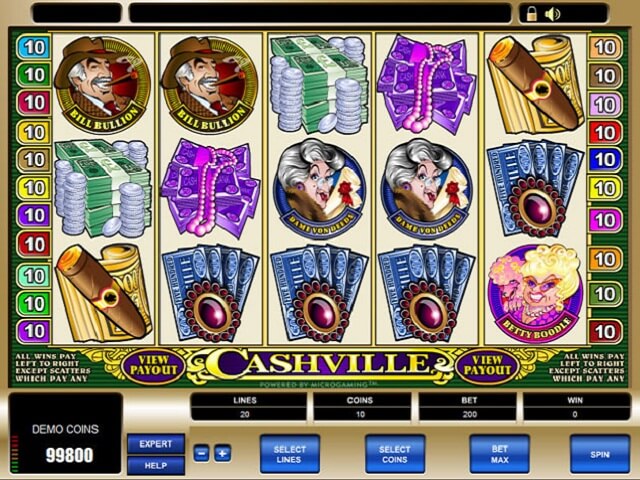 Head on down to Cashville! Cashville is a Microgaming video slot game that takes players into a humorous world of fat cats and large prizes. As with many of Microgaming’s slots, Cashville brings rather sharp satire as it makes light of stereotypical billionaires while giving you the chance to win quite a bit of money yourself. You can play Cashville at casinos such as River Belle Casino, All Slots Casino, Crazy Vegas Casino, Platinum Play Casino and others.

Cashville provides a unique take on high society, with symbols such as stacks of dollars and coins, a cigar and money clip, pearl necklaces and more. There are a number of ways to win large amounts of coins, and you’ll be chuckling while you play at the billionaire archetypes such as Bill Bullions, Dame Von Deeds, Sir Sterlings and Bettie Boodles.

Cashville has fairly low coin values, including 1 cent, 2 cents, 3 cents, 5 cents, 10 cents and 20 cents (prices shown in CAD, players from outside of Canada may have to adjust accordingly). However, you can bet a fairly substantial amount at the largest coin value and with the maximum number of coins bet per line.

There are a few nice jackpots to be won in Cashville. The largest is 50,000 coins, with several ways to win 10,000 coins in a single spin, as well.

To win 50,000 coins, you have to get five W symbols on a single, active payline. For 10,000 coins, simply get five of the same billionaire character (such as Bettie Boodles or Bill Bullions) on a single payline. There is no minimum bet, but your winnings will adjust accordingly to your bet size and coin value.

The W symbol is wild, unsurprisingly, and can substitute for any symbol but those of our four billionaire friends. Meanwhile, the scatter symbol is a simple S symbol, and hitting 3, 4 or 5 of them will multiply your winnings by 8, 30 and 300, respectively.

Finally, Cashville has a “Gamble” bonus game that you will likely be familiar with if you have played other Microgaming slots. After any win, you can enter the gamble feature, where you select the color of a concealed playing card. If you are correct, you double your winnings, while if you are incorrect, you lose them.

Cashville is a humorous take on billionaire tycoons and heiresses that will have you chuckling all the way to the bank. With some nice bonus features and a good-sized jackpot, this is a slot game that players should definitely give a chance.