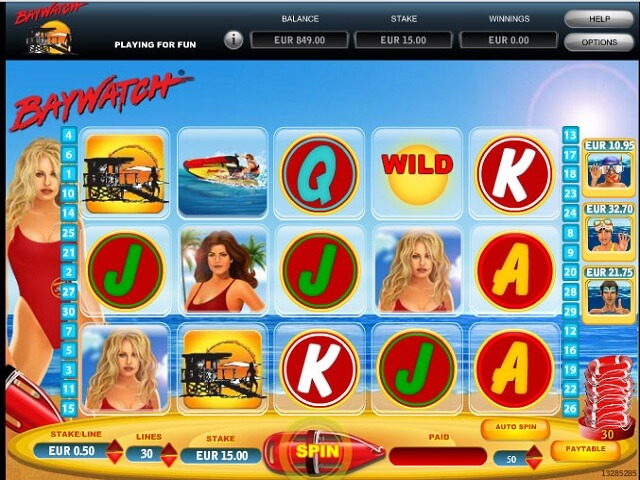 Baywatch requires no introduction for anyone who was around back in the 1990s, especially if they were into sexy females in swimsuits. Or, just big David Hasselhoff fans, I suppose. Now, the famous show has been turned into a video slot game that many people are enjoying, whether they were huge fans of the show back in the day or not.

Baywatch is a Playtech video slot, so you can find and play it at Playtech casinos such as City Club Casino, Mansion Casino, Paddy Power Casino, and so forth.

Baywatch as always about the visuals, especially when it came to the show’s attractive cast, including the unbelievably hot Pamela Anderson, who welcomed a generation of boys into puberty. Therefore, it makes sense that there are lifeguards galore here, with Pamela Anderson (as CJ Parker), Yasmine Bleeth (Caroline Holden on the show), and Gena Lee Nolin (Neely Capshaw), along with male lifeguard David Charvet (Matt Brody). Unfortunately, David Hasselhoff is not included, likely due to licensing issues.

This video slot hammers home the theme with light-hearted music and sound effects. The other symbols, including different boats and a jet ski, are also helpful in keeping the beach theme going. The background is a sunny beach, with waves and a blue sky to top it all off. This is your normal 5-reel, 25-payline slot with the kind of features you’ve come to expect, like a “Bet Max” button, sound muting, and other features.

I’ll say it up front: Baywatch has to have the craziest betting range I’ve ever seen in a video slot. The coin values start at just one cent and go all the way up to $50 CAD, and because there are 20 lines to cover, you can play every line for just 20 cents or $1,000 per spin, if you are a true high roller.

The regular jackpot is worth a conservative 3,000 coins, and since you can only bet one coin per line, that’s where it maxes out until you get bonuses and multipliers into play, which fortunately are plentiful in the Baywatch video slot.

It should come as no surprise that the most iconic face of Baywatch is also the most valuable symbol in the game. That’s right; in order to win the jackpot, you’ll be looking for Pamela Anderson’s smiling face, as you’ll need her symbol five times on an active payline in order to strike it big.

Special symbols are plentiful in Baywatch. First, you have the wild symbol, which is Pamela Anderson, which again is quite expected. She looks great, of course, and you’ll be happy to see her not just because of her attractiveness, but also because she substitutes for all symbols except other special symbols.

The scatter symbol is a shot of the lifeguard stand as a silhouette while the sun sets in the background. With two or more of them, you get an extra payout on top of your regular winnings, and with three or more, you trigger the free spins mode.

Finally, the Rescue Feature symbol only appears on reel five, but triggers its own bonus that we will discuss in the next section.

The Rescue Bonus feature happens when the Rescue Bonus symbol pops up on the fifth reel. When you’re lucky enough for that to happen, you get to choose between a CJ re-spin feature and a lifeguard mini bonus. The CJ re-spin feature, which spins with two, three, or four wilds randomly distributed on the reels. The lifeguard mini bonus gives you 15 lifeguard symbols that are hidden below the sand, with each giving a cash prize that can be collected if you can match three of a kind.

Baywatch is really a cool video slot. While the theme alone would have brought people to the game, Playtech didn’t just mail it in and instead have created a video slot that stands on its own. With the craziest betting range I’ve ever seen and some fun bonus features, Baywatch is worth a look, and not just for the obvious reasons.