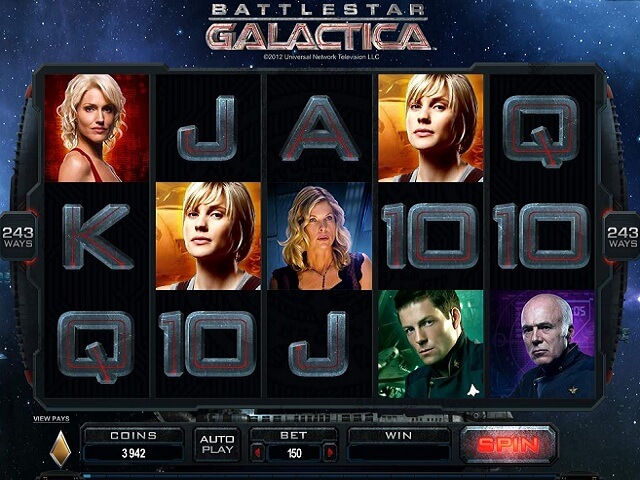 Battlestar Galactica is one of Microgaming’s greatest video slots of the past few years, especially in terms of graphics and popularity of the source material. Standing alongside some of their other top games such as Immortal Romance, Battlestar Galactica is a no-brainer for fans of the well-loved show, but what about everybody else?

As Battlestar Galactica is a Microgaming slot, Canadian players (and others all around the world) can find it at Microgaming casinos such as EuroPalace, Gaming Club Casino, River Belle Casino, and many more.

Right away, you get a taste of what is to come with Battlestar Galactica as the loading screen shows you one of the Cylon warriors that fans of the show will instantly recognize. When the full game loads up, you’ll see portraits of all of the great characters you remember from the series, rendered in stunning high definition graphics.

Characters immortalized in symbol form include Commander Adama, President Roslin, Doctor Baltar, and Lieutenant Thrace, among others. Other symbols from the show’s iconography include ships, weapons, and enemies from the series.

Best of all, when you trigger wins with the different characters, you see video clips, which change as you continue to play the game. It’s all controlled by an “experience bar” that progresses as you play and unlocks further content as you go.

The updated video clips mean that you can play a long time and still feel as if you are engaged in the game, which is a great feature. The feel of the game is enhanced further by theme music and sound effects that don’t distract you, but instead just supplement the experience nicely.

At first glance, it would appear that Battlestar Galactica’s coin values are insufficient, ranging only from 1 cent to 5 cents at the maximum. However, with 10 coins per line maximum to be wagered and plenty of lines to bet, you can still wager up to $15 per spin, or bet just 30 cents per spin at the low end of the spectrum.

While some nice prizes are available during normal play without the aid of bonuses and multipliers, you can win a startling amount of coins when they are included. How much? Up to 1,400,000 coins!

Battlestar Galactica’s largest prize requires you to get into the free spins mode, first. Then, you have to use your 3x multiplier while betting the max to have a shot at the largest prize. Otherwise, multiple symbols are worth up to 4,000 coins if you get them in normal play at just one coin bet per line. Furthermore, the Ion Storm feature happens at random and can turn up to five reels wild at the drop of a hat.

The wild symbol is the Battlestar Galactica crest, and can count as any symbol besides the other special symbols. The logo appears stacked on the first reel and can lead to a whole reel of wilds, at times.

The Colonel Viper ship is the scatter symbol in Battlestar Galactica, and when you get three or more, you will get 15 free spins. During your free spins, you’ll have a 3x multiplier by default, as well.

When you play Battlestar Galactica, you can sometimes select “Run Mode” and “Flight Mode”. Run Mode means that any of the standard 9, 10, J, Q, K, and A symbols can become wild at any time. Flight Mode causes random wilds to appear which can split themselves to create even more wins.

Battlestar Galactica could have been a very lazy effort made to capitalize on a successful television series, but Microgaming instead decided to go all out and really make the game one to remember. With plenty of features, amazing graphics, and a ground-breaking experience system to keep your gameplay experience fresh, you will enjoy Battlestar Galactica, whether you’re a fan of the series or a complete newbie.