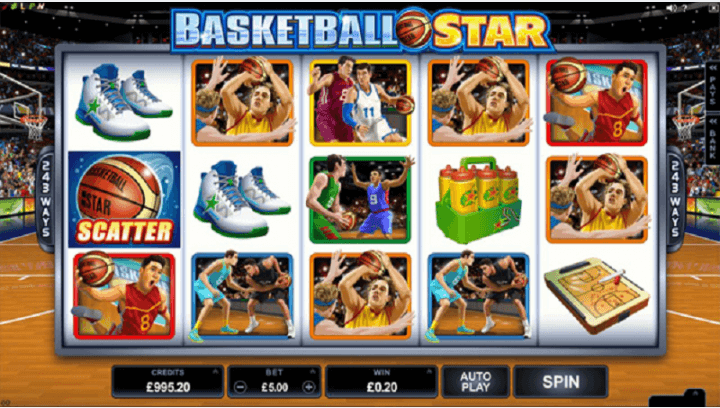 The new Basketball Star slot game from Microgaming is quite similar in theme like Football Star, Cricket Star and Rugby Star slot games but has its own identity through thematic symbols and action packed animations. Basketball Star is an action packed online slot game. The win animations in the main symbols bring alive on the screen all the basketball manoeuvres, including the popular slam dunk. Because Basketball Star is a 243 ways to win online slot game, winning combinations occur more frequently and result in more basketball action on the reels. Stacked wilds, wild reels and free spins with multipliers will make the payouts and this slot has also Auto play function and customisation options.

Wins will be paid for left to right adjacent symbol combinations

Due to the 243 way wins format, you do not have to worry about selecting paylines, although it is important to note that minimum wager per spin stands at 50 coins. There are a total of four coin values to choose from in the $0.01 to $0.10 range, whilst they can also choose up to 10 coins, translating to up to 500 credits in total.

Basketball Star Logo acts as the Wild symbol, substituting for all game icons with the exception of Basketball Scatter to complete wins where possible. Wild occurs stacked on reels III, IV and V, whereas randomly activated Wild Shot feature can see up to two reels from the middle three turn Wild with guaranteed wins.

Wild Shot feature with guaranteed wins as well as Free Spins with Rolling Reels and multipliers up to x10. The main bonus round can see casino gamers land up to 120,000 credits, with 15, 20 and 25 free spins awarded each time three, four or five Scatters occur in any position. The Rolling Reels feature is active during the Free Spins round and it can award multiple successive wins as well as multipliers up to x10.

While the Free Spins round awards wins up to 120,000 coins, there are some nice prizes to be won in the base play as well. Maximum payout per single winning way is 6,000 credits and is awarded when five basketball players jumping for a slam dunk appear anywhere on all five reels.