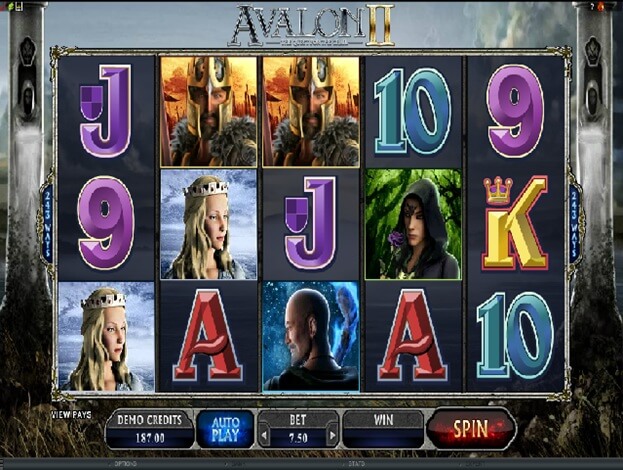 Avalon II is a new slot game released by Microgaming. In this game, the player can enjoy creating combinations with the usual symbols related to the theme depicted. With 243 ways to win, this game also brings more excitement as it is filled with numerous bonus features for the enjoyment of players. The player is invited to take a journey through the Kingdom in order to retrieve the grail and to return to Avalon.

The player will set the stake before clicking on the Spin button to start the game. In order to do so, he needs to select the number of coins to bet and the coin size. In Avalon II, all the winning combinations need to appear from left to right on the reels, on consecutive order on the reels. The win amount is dependable on the bet size.

Merlin is a special symbol that can randomly appear during play. When it appears, it awards either a random cash prize or a random multiplier.

The Lady of the Lake symbol is an expanding Wild symbol and it can substitute any symbol on the reels, except the Grail symbol. When this wild symbol appears on reel 3, it expands to award additional wins.

The Grail symbol is a special symbol and when three or more of it appear on the reels, they trigger the Grail Bonus. There are eight possible bonus games in the Avalon II slot game. They are as follows: