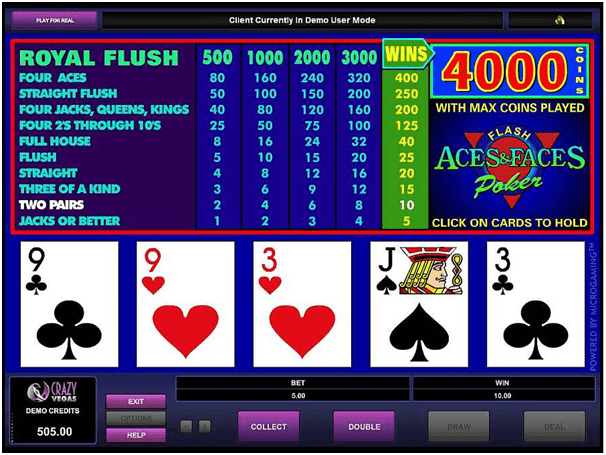 The game is played with the standard deck of fifty-two playing cards, and here, no amount of cards act as wilds because there are no wild cards. Basically, the game is a variant of the popular 8/5 Jacks or Better, though it offers you a higher payout in case of four-of-a -kinds – but those cards have to be aces and faces.

This game was designed and developed by Microgaming, so you can expect a high standard of visuals and audio. Though these may not match the premium quality of other games the developer has released, they are good enough to engage you and ensure that you are hooked on the game. The same applies to the audio. However, this can be an advantage for gambling enthusiasts as they get to focus more on their gameplay and effectively develop winning strategies.

Players are dealt an initial five cards. They can then start building their hand by discarding unwanted cards in hopes of picking up the needed cards from the playing deck.

The higher payouts are reserved for four-of-a-kinds of aces or faces, a royal flush or straight flush. In the online version, as a player you have the chance to win yourself an amazing jackpot of four thousand coins in case you get a Royal Flush, but you have to bet a maximum of five coins to get the royal flush. Moreover, the payouts are determined as per the standard poker hands. Throughout your gameplay, you need to opt for the lowest choice in number that is possible for you to create via your initial hand. After this, you will have to abandon all the remaining cards. You must also note that a “High Card” is the indication of Jack to Ace.

Symbols are obviously the cards and if you enjoy poker games that feature the element of strategy. then you will certainly love playing the Aces and Faces poker game online. It greatly relies on you making the right move at the right

One of the highlights of the Aces and Faces poker game is that it offers you a unique double or nothing bonus round. You will be shown the dealer’s card and then given the option of choosing one of four face down cards. If the card you pick beats the dealer’s, you will end up doubling your winnings. So, if you consider yourself a gambler who cares to enjoys high risk, high reward scenarios, then this game has the potential to fulfil your desire for “risky gameplay”. The more you play, the better you will get at developing a strategy that can help you with building a winning hand. However, it will be better if you take bigger risks only after properly acquainting yourself with the game.

This game is based on Jacks or Better, but what makes it different is the increased payout for all Four of a Kind “Faces and Aces” combinations (J, Q, K, and A). The game uses the same standard 52-card deck as Jacks or Better and payouts start as low as Jacks or better.

Further down the list is the low Pair (2s through 10s). Hold the Pair and re-deal three new cards.

Also, as a rule of thumb, keep a pair of high cards, but discard low pairs. The new cards will offer you a better chance of getting Three of a Kind or better.

Aces and Faces video poker offers you all the thrill and fun that you can might expect from a good quality card game, but if you care to win big of 4000 coins straight royal flush in this game, then it will take time and practice to master the basics. In this case, play the game more often in order to know your way around its simple yet exhilarating gameplay. So get to better know the paytables associated with Aces & Faces. This will definitely improve your overall gaming experience and ensure that playing becomes much easier for you.