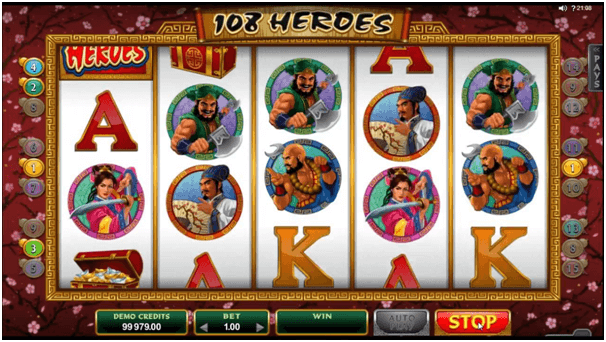 108 Heroes is a mystical low-variance video slot by Micorgaming that dredges up a whole lot of Eastern lore. You will find in the reels violent warriors, including a samurai-wielding geisha and a snarling, muscle-bound Arabian with a machete in each hand.

The music, too, has a certain Chinese/Martial Arts vibe and you can get to play from one to 75 credits per spin in this five-reel slot and a free spins bonus, which comes with a generous multiplier. There’s also an enticing King’s Treasure bonus game to enjoy in this slot.

The 5×3 reel grid is located within an ornate golden border, with each reel divided by a golden bar. The red background, is illustrated with the skeletons of numerous trees, cherry blossom to the naked eye. Below the reels, you’ll find all the regular controls, with buttons for Spin and Autoplay and tabs recording your bet, your wins and your pay-lines.

There are ten symbols in 108 Heroes, including three of the main playing cards, namely ace, king and queen. Character symbols probably relate to real-life individuals, there are four men and one female, like samurai-wielding geisha. The top warrior is the one wearing the golden armour. He pays 2,500 for five, 500 for four and 250 for three. The man wearing the blue headdress pays the same amount for five and four, but just 100 for three. Next it’s the shirtless warrior, followed by the geisha and then the muscle-bound Arabian.

Free spins can be won by landing three or more Chinese letter scatter symbols. The number of free spins is always 10, but the free spins can also be re-triggered during bonus play. What’s more, all pay-outs accumulated during free spins come with a 3x multiplier attached. Scatters are linked to some monumental pay-outs, including 150 for two, 300 for three, 3,750 for four and 30,000 for five.

The King’s Treasure bonus game is activated by landing three or more treasure chests on an active pay-line, from left to right. During the mini-game, you’ll have to open three, four or five treasure chests to reveal cash values. The number you get to open depends on how many symbols you landed in the first place. You could win as much as 2,500, or as little as 36.

The Scatter token is represented as a green icon with Chinese letters and mountain. By collecting three or more of them, one can get ten Free Spins that could be retriggered.  If a player gets the bonus round, he could be awarded from 150 up to 30 000. It’s important to know that the size of prizes depends on the player’s Total Bet on the spin that set of the bonus.

Not only the Scatter can make great payments, but also the free rounds, where the bettor can win tripled amount of money. Just to give you  as many of the triple winnings, as you can get, the Scatter token stays active in the bonus round. So, the top prize in this free round is 120,000 coins.